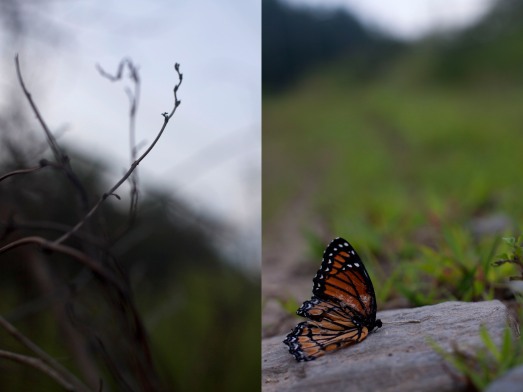 Just to clarify- I came across the already-dead monarch..

These photographs are from August 14th, one of the many ventures I’ve undertaken with Sampson (my Canon) this summer.
I’ve been pouring my all into the hunt (of job) for the past few months, which can get maddening as it generally places you in front of a computer screen for the bulk of the day, as everything is done online and electronically these days.  When my sanity seems in peril I take a break, usually to walk my dog or my camera.  Sometimes I just get into my car and drive around until I see something or some place that I find interesting, pull over, and have at it.

That’s what happened with the both of these photographs.  The first, a close-up of foliage and a rather dead tree-type of form, I came across after pulling over near one of the many stretches of massive power-lines.  I had ended up hiking up a small hill and down a barely-worn path.

The second photograph was also in pursuit of a herd of power-lines, although I had stopped short on a small path before even getting that far.  It was right next to a small, older woman’s little house.  She had been outside gardening, and I guess my presence had unnerved her, as she slowly made her way over to me to see what I was doing.  Her first language was not English, so she was pensive and visibly having a difficult time communicating, so I showed her my camera and said that I was (okay, I may not be any more but I WAS) an art student, and I am just taking photographs.  She seemed wary but somewhat understood- the look of caution fading a bit from her small features.

I made a note of her address so that I could send her a couple of photographs in the mail later, as a token of thanks.

Since I started going to school in the city, I’ve really grown to enjoy it so much more-so than I ever thought I would growing up.  I used to want to get my own ranch with a hundred or two hundred acres, a couple of horses and a dog or two.  Now I want my career to finally take off in the city, so I can get myself another little apartment, placed so as to give me the  ability to walk around to where I need to go, and wander, looking around at all of the different people, shops, architectural time-zones, etc.

I still adore the beauty that can be found in rural America, but I crave the activity of the city.  It has its own beauty, too.

Speaking of such- I have recently taken up a new part-time position working in a cafe in the city.  I can take the train in during the mornings I work, or stay with Preston or perhaps other friends.  Today was a little rough, with thoughts akin to “why am I back to doing this type of work?” and “why have I not been hired for a full-time, career-pursuing position by now?“.  Luckily (well, unfortunately for the two of us) one of my coworkers is in the exact same position as I am, so we can relate and remind each other that the business of newly-graduated student job-hunting is hard.  We are not failures, and in fact should be proud that we have taken the step to do whatever work we can while we search for our careers.  We are working earnestly.

I now hope not only for my own career to begin, but for hers too.

Well, I think I’ve gone on long enough.  I have a long shift at the cafe tomorrow!